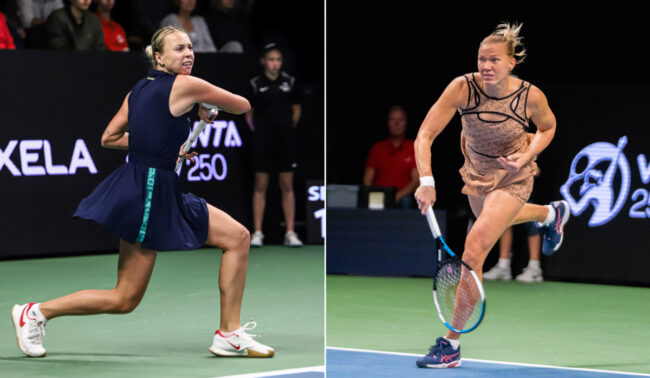 Today at 6 pm Estonian players Anett Kontaveit and Kaia Kanepi will go head to head in the semi-final of the WTA 250 Tallinn Open. Both players won tough three-set matches on Friday to set up the all-Estonian semi-final clash.

Estonian tennis stars Anett Kontaveit (WTA nr 4) and Kaia Kanepi  (WTA Nr 32) will meet in the semi-final of the WTA Tallinn open today at 6 pm. Not only is it the first time that a WTA tournament has been held in Estonia, tomorrow’s match between Kontaveit and Kanepi will also be the first time they have ever played against one another competitively on the tour.

Anett Kontaveit reached the semi-final after a tough 6:3, 3:6, 6:3 win over qualifier Ysaline Bonaventure (WTA 138). Kanepi  also took three sets to overcome her opponent Karolina Muchova (WTA Nr 224). Kanepi started the encounter well, quickly taking the first set 6:2. However Muchova came back into the match taking the second set 6:3. It took a tiebreaker to settle the match 7:6 in Kanepi’s favour in the third.

Tomorrow’s all-Estonian semi-final means that it is now guaranteed that at least one Estonian player will be in the final of the tournament on Sunday, October 2. Where they will face either Belinda Bencic (WTA Nr 14) or Barbora Krejcikova (WTA nr 27).

Tickets for today’s semi-final as well as the final tomorrow are still available on the Piletitasku ticketing portal here.