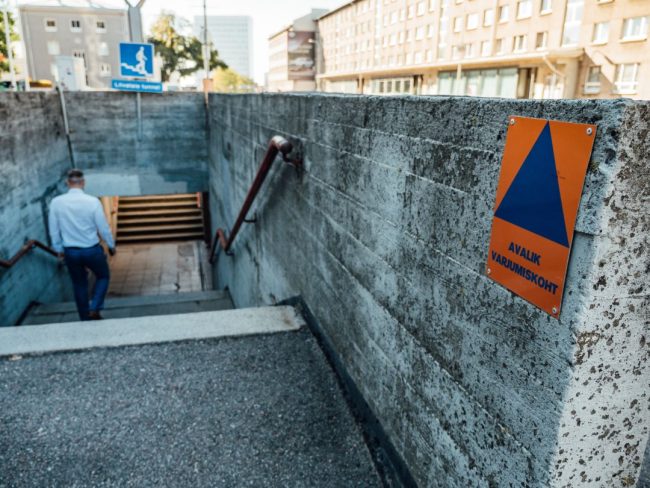 The Estonian Rescue Board (Päästeamet) in collaboration with the Land Board (Maa-amet) has launched an online map of public shelters around Estonia. In total, more than 100 shelters with space for up to 60,000 people have already been created in the past year – partly in response to Russia’s invasion of Ukraine.

“In under a year, we have identified, verified and marked 103 public shelters for around 60,000 people. The goal by the end of this year is to map and mark shelters for up to 100,000 people,” explained Sten-Patrick Kreek, a spokesperson for the Rescue Board.

The shelters, which are intended for members of the public who find themselves out in the open in a town or city when an emergency warning is issued, are all marked by a blue triangle on an orange background, with the wording “Avalik varjumiskoht”(“public shelter” in English) written underneath.

For those who are at home or work when a warning is issued, it is advised to remain where you are and take refuge in a basement, underground car park or in a windowless room.

In larger villages towns and cities, warning sirens have already been installed. In addition, warnings will also be sent by SMS via the EE-ALARM system as well as broadcast on TV and radio stations. Along with military threats, warnings could also be issued for exceptional weather or pollution conditions.

All of the current emergency shelters can be found on the Land Board’s online map here as well as on the “Ole Valmis!” app.