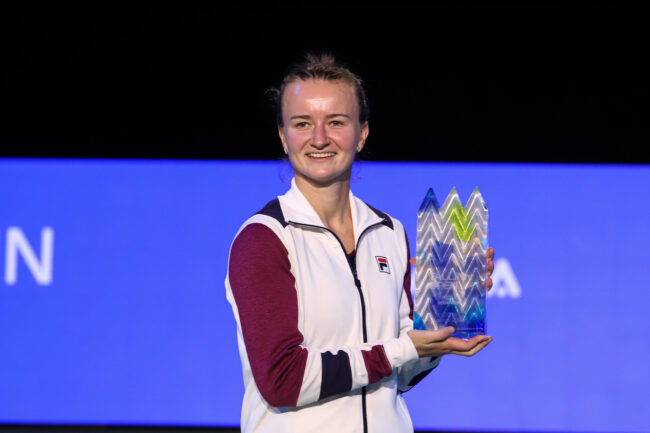 The first ever WTA tennis tournament to ever take place in Estonia came to an end yesterday, with a final that saw Estonian tennis star Anett Kontaveit take on Czech player Barbora Krjecikova. Unfortunately, for the home fans, which included President Alar Karis, the dream of an Estonian victory was dashed as Krjecikova put on a fine display to defeat Kontaveit 6:2, 6:3.

Sunday, October 2, saw the final of the inaugural WTA Tallinn Open, the first ever WTA women’s tennis tour event ever to take place in Estonia. Excitement for the tournament had been slowly building all week, as home players Anett Kontaveit and Kaia Kanepi advanced through the rounds,  going on to meet in the semi-finals on Saturday – a match Kontaveit (WTA Nr 4) would win 6:4, 6:4 over Kanepi (WTA Nr 32).

Kontaveit’s victory in the semi-finals saw her face Barbora Krjecikova (WTA nr 23) in Sunday’s final. Krjecikova, had defeated Belinda Bencic (WTA nr 14) in her semi. The final, which was played to a sold-out crowd at the Forus Tennis Centre in Tallinn, saw the President of Estonia Alar Karis make the coin toss before the match.

Despite the hope and enthusiasm of the crowd, after a tight opening few games that saw the pair tied at 2:2. Krjecikova slowly began to take control of the game with some sublime drop shorts and variations in speed, breaking the Estonian player twice in a row to win the opening set 6:2.

Kontaveit came back fighting at the start of the second set, breaking Krjecikova’s serve in the opening game. However, she then lost her next two service games to find herself 3:1 behind. Kontaveit then dug deep to break Krjecikova’s serve and hold her own to bring the match back to 3:3 in the second.

The comeback was short-lived, however, as Krjecikova went on to win the next three games, dropping only three points to win the second set 6:3 and the match.

During the course of the tournament, which ran from September 24 to October 2 more than 16,000 people attended the matches at the Forus Tennis Centre in Tallinn.

With President Alar Karis, Tallinn Mayor Mihhail Kõlvart, Tournament Director Allar Hint, WTA Senior Communications Manager Chris Whitemore and all the players praising the inaugural tournament, there is a strong possibility that it will return again next year.