The Wild Island of Hiiumaa 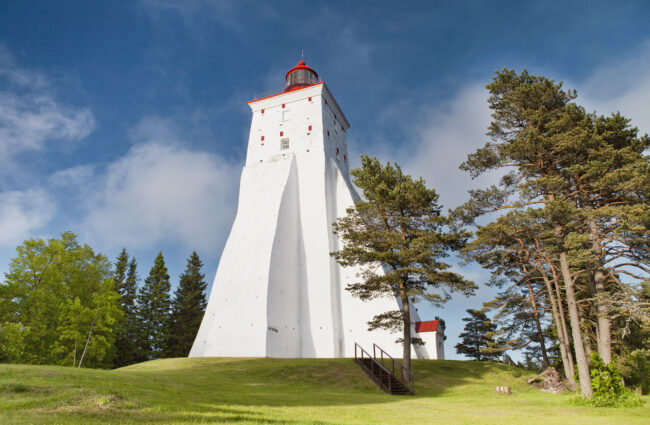 Estonia’s most forested county is known for its lighthouses and untouched wilderness.

When one thinks of Hiiumaa the first things that comes to mind are the majestic lighthouses, vast forests, and the sea. Hiiumaa is more peaceful than Saaremaa and where one can enjoy peace and quiet at the beach and in the forest. I once drove from Heltermaa Port to the other side of the island and did not meet one person. I passed but a few deer waiting at the side of the road. This says a lot about the feeling of Hiiumaa. Estonia’s second-largest island is home to 8400 people, over a third of which live in the island’s only town, Kärdla.

Here are a few attractions and nature reserves you must see when visiting the island as rec- ommended by us and by some Hiiumaa locals.

1 Ristna is a great beach for birdwatching along with Sõrve and Põõsaspea. Ristna is at its best in October, but one can also visit in winter when the sea rarely freezes. Estonia’s windiest place is also a favourite among surfers. There is a lighthouse and RMK Nature Centre at Ristna too.

2 Kõpu Lighthouse. One of Hiiumaa’s most important attractions is the Kõpu Lighthouse, which is one of the world’s oldest lighthouses and the first one of its kind on the Baltic Sea. The first fire was lit there in 1531. You can go inside the lighthouse too. Kõpu Cape is partially protected by the rich variety of different species of vegetation not found anywhere else on the island. Western Estonia’s highest point can also be found at Kõpu (68 metres above sea level).

3 Vanajõe Valley. A river flows through this deep valley and a rare breed of mink has made a home along the river bank and has lived in Hiiumaa for many years.

4 Sõru. Hiiumaa’s most southern point is an excellent nesting spot for birds where you can find many rare species. From Sõru Port, take the six kilometres long ferry ride to Saaremaa.

5 Käina and Kassari are fantastic nesting spot for birds. Reeds fill the bay at Käina and in autumn it becomes home to thousands of ducks, geese, and cranes. There is a bird watching platform in Orjaku and a nature trail that follows the shoreline of the bay. Kassari Island has many unique beaches and juniper meadows. Avocets, sandpipers, and other rare species of birds can be found at the sea shore of Kassari Island.

6 Sääretirp is a long and narrow peninsula that turns into a narrow cape at its southern end. You can walk all the way to the end along a rocky trail.

7 Kaibaldi Sands a ten-hectare area sandy plain in the middle of Hiiumaa.

8 Tahkuna is known for the majestic lighthouse built in 1873. Tahkuna is also interesting for nature lovers. Hiiumaa’s most northern cape has a combination of old forests, marshes, and beautiful sandy beaches. Neeme Cape is also a great area for birdwatching.

9 Hiiumaa “Eiffel”. It was one man’s dream to build a 31.4 metres tall tower (1/10 of the height of the Eiffel Tower in Paris) and it has now become one of the island’s most recognised landmarks.

10 Kõrgessaare Coast is another good nesting place for birds. Its worth a visit in summer to see the Kõrgsaare Orchid Trail, which is home to tens of species of wild orchids.

Take the ferry from Rohuküla Port, which has several daily departures. An 20-kilometre trip to Heltermaa lasts one hour and 15 minutes.

Three island locals, either living or born in Hiiumaa gave The Baltic Guide some tips about their favourite places in Hiiumaa.

Harri Rinne, part-time resident of Hiiumaa, musician, writer, songwriter.
My favourite place is my terrace with a view over the sea, but this is meant only for me. I have spent 17 summers and sometimes spring, autumn, and winter.

Hiiumaa has an astonishingly-varied natural landscape and there are places I haven’t even visited. Places and their atmosphere can be rated by the events that are organised there. There is a jazz festival in the boat shed, there are exhibits in old electrical buildings or even Reigi kirikla, dancing in barns. There are different events held in the lighthouses too.

If I had to choose it would be Kalbaldi Sands. There are people on the island that don’t even know about it though it’s visible from Google Earth. It is ten-hectare beach in the middle of the forest. It’s a place where nothing grows, giving it a sense of magic, an untouched place.

Second place would go to Saaretirp, the narrowing cape among the junipers with a trail that stretches all the way to the sea.

In third place, I would mention the local Eiffel Tower. One man’s dream was a wooden tower with, at its base, the the foot of it a garden made from different pieces of furniture and other bits and pieces.

In fourth place would the Tahkuna lighthouse where the remnants of firearms litter the beach.

My favourite places in Hiiumaa are tied to my childhood, especially the Vanajõe Valley. I went there for the first time for a school excursion and experienced something mysterious.

Some of it is also not typical to Hiiumaa: the river among the high desert coastal slopes. It’s small but at the same time mighty.It’s off the beaten track so it’s possible you won’t run into anyone when you’re there. 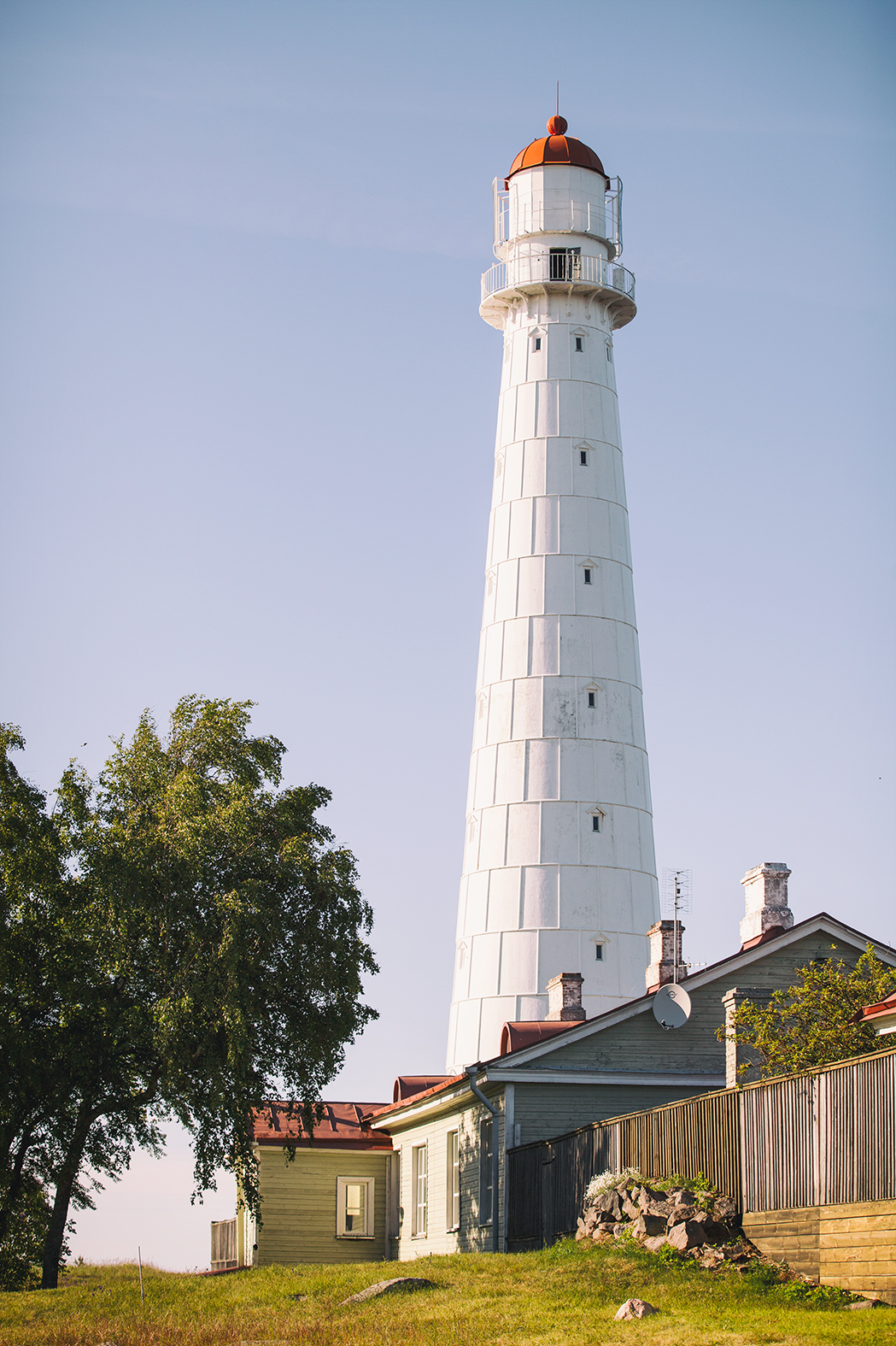 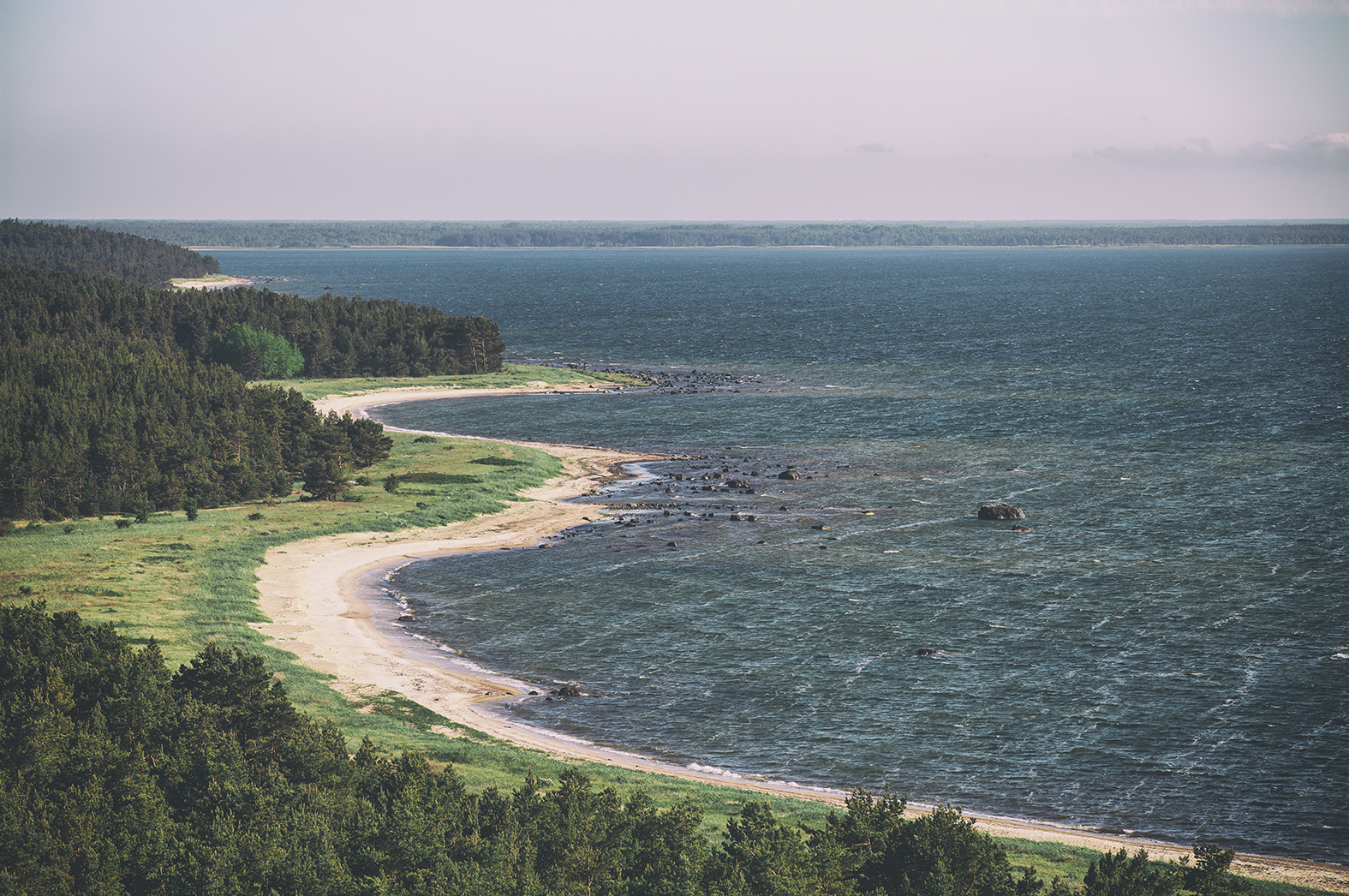 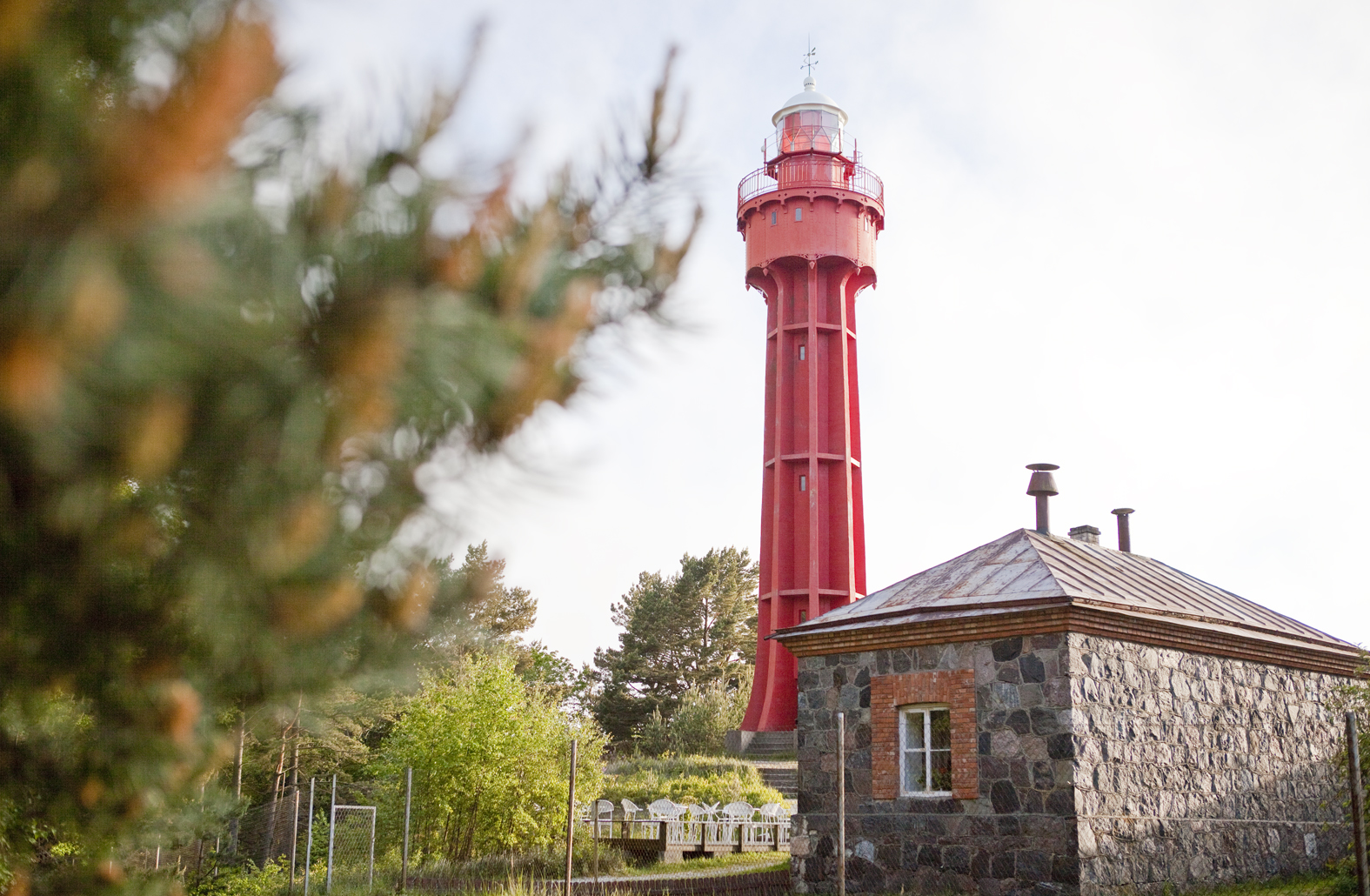 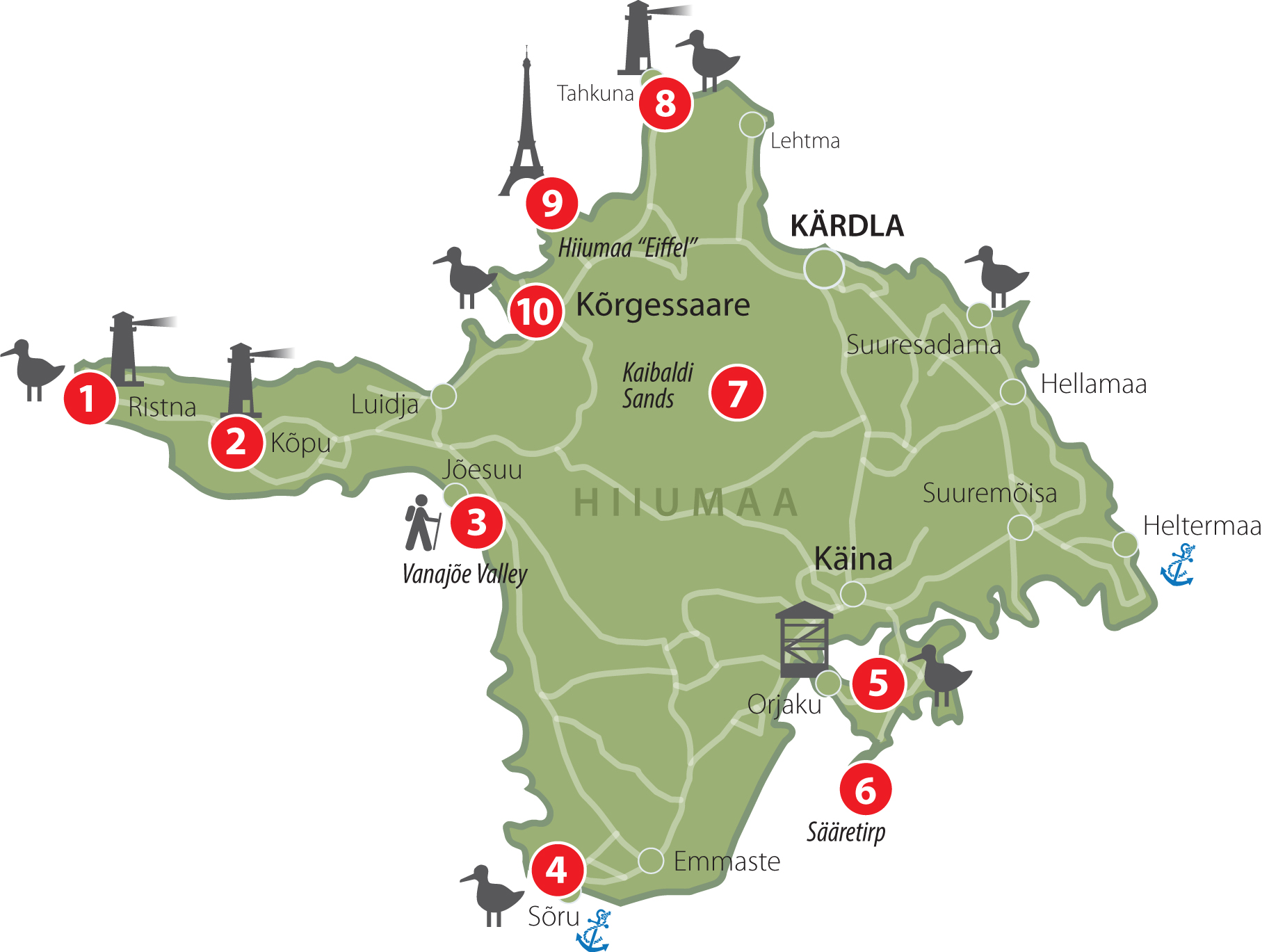