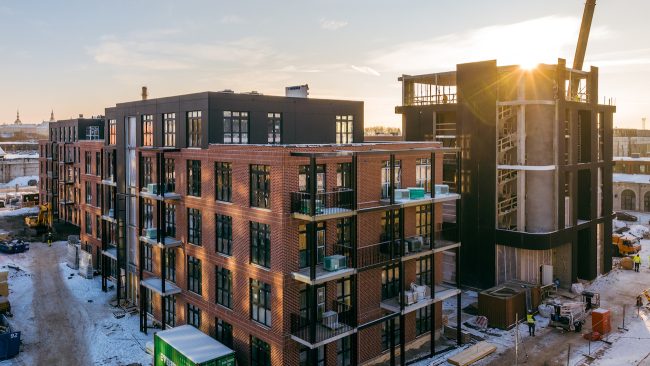 Despite the downturn in the real estate market, which has seen the sales of new apartments slump by around 80 per cent. Endover, one of Estonia’s best-known property developers announced that December was its second most successful month in 2022. Concluding 18 transactions for new apartments and commercial premises in Tallinn, amounting to a turnover of 5 million euros.

During the last month of the year, 50 apartments and commercial premises in new buildings were sold or booked in Tallinn. Of these 50, 18 were transactions, making Endover the most successful company in Tallinn’s real estate market in December and giving the company its second-best month of the year in terms of sales turnover.

According to real estate analyst Tõnu Toompark, the top-selling project in December was Endover’s Volta Residences. There were also transactions for apartments in the Kopli Liinid development. This indicates that the developments of Põhja-Tallinn and Kalamaja, even in the passive market, remain much more preferable than others, since the entire area is developing, the location is good, and the buildings themselves are attractive.

According to Olari Vokk, Head of Sales at Endover, the December statistics show that the real estate market is not frozen, as many have said, rather it is constantly changing. In today’s environment, smaller apartments with lower fixed costs are more popular. The buyers of luxury real estate have not disappeared either, as there is a shortage in this niche in the market.

“Our experience shows that in changing circumstances, it is necessary to first study the needs of people and adapt the strategy based on their expectations. Today’s buyer thinks about making the decision for a long time. They have a clearer idea of the actual costs associated with buying an apartment. Buyers are adjusting to Euribor growth and inflation. They more accurately analyse and estimate the future value of homes and related costs. Therefore, transactions are planned and weighed very carefully,” Vokk explained.

Vokk singled out the four most important factors on the basis of which people today decide to buy a new apartment: “First of all, the apartment must be ready, and not just exist on paper. In an unstable market, this is a great advantage, and such apartments are in short supply. Endover has a strong competitive advantage here as we have one of the largest portfolios of completed apartments on the market. Second is the good location. Preference is given to real estate, the value of which will increase over time. In Tallinn, such is available, for example, in the city centre, Põhja-Tallinn, Haabersti and suburban Viimsi. Third is the quality of construction and energy-saving solutions that will keep costs low even after the first year of living in the new apartment. Fourth is the additional value of the new apartment. For example, the developer may offer a ready-made kitchen, or the new owner is reimbursed for all housing costs within the first year, which is very important for a price-sensitive buyer. Our portfolio today is well suited to these factors.”

Endover is an Estonian real estate developer with over 25 years of experience in the industry. The company’s portfolio includes 70 buildings and 2,840 apartments with a total area of 368,000 square meters.